Max Statler closes out "Raptor Week" with stories and tales from his decade long career with Glendale. He  went from playing soccer at Mesa State, to walking onto the football team and out-kicking the starting kicker (with a sports hernia?), to finding his place with Glendale Rugby after Ted "the spread" Browner told him to show up to training one day. He's played under 3 different Glendale coaches over his impressive career, and almost kicked the can after a 7's tournament ... (don't worry, he survived).

Max recently came back from the Classic Eagles tour in Bermuda, helping the squad hoist their first ever piece of hardware when they defeated France 19-0 in the plate final.

He's been a speed merchant for Glendale through out his career, and plays with a (self-admitted) chip on his shoulder. 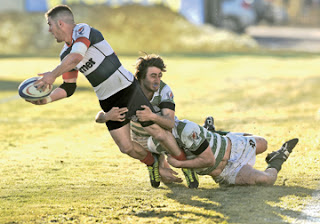