A Podcast so Nice, We Recorded it Twice ... MLR Playoff Preview Special

Our first recording debacle took place Monday night as the PickEm gang sat and discussed the great weekend in rugby. This were going smoothly, and time whisked away as opinions and analysis were tossed around the room all willy-nilly. After intense  deliberations (and of course some libations), it became aware to the host / audio engineer / chief editor of Rugby PickEm that our world famous red microphone (the one which hogs half of our logo) was not plugged into the tablet. Tempers were lost, alliances were stressed, but the gang found it in their hearts to get back on the saddle and deliver with an (ever more crisp) 45 minute cut. It took everything in our souls to deliver this weeks episode (blood, sweat and tears people ...) but we came out stronger on the other side. Onto this weekend's results ...

Most Tries on the 2019 circuit- Carlin Isles

Coach of the Year - Mike Friday

What an amazing year for this group of players. We'll always remember 2019 as the official death of the "sleeping giant" label for USA Rugby.

Above: Ben 'Stinkledick' Pinkleman with the fabulous footwear, Mike Friday with an ear to ear smile, and Danny Barrett looking substantially bigger than the rest of the people pictured. Note to anyone trying to look taller in a picture .... stand on the side and inch up as close as you can to the camera. You'll see some good results.

In the final week of MLR year 2,

Houston stays hot and finishes the season 4-1 under interim head coach Paul Emerick with a road win, defeating the Utah Warriors. We want to pre-congratulate the Houston ownership team for making the right decision and hiring Paul as the full time coach for next season.

Toronto beats RUNY at the final bell with a game winning drop goal by the fly half Sam Malcolm.

San Diego clinches home field advantage as they close out NOLA at home and end the Gold's season.

Lastly, Austin scores a couple of late tries ... but it's not enough to beat the defending champion Seattle Seawolves. Austin finishes winless, Seattle looks to repeat.

East vs. West, brawn vs. blitz, grit vs. glam 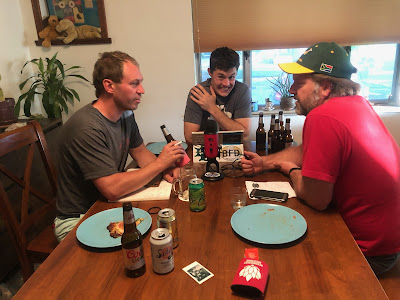 Above: Proof that at one point Barry had the unplugged mic chord in his hands and didn't say anything


P.S. Glendale made a coaching change while we were recording, and we throw some names out as the  potential new hire.