In the final show before summer break, the lads sit in to recap the two exciting MLR semi-final games. The west coast teams reigned, and we'll have a San Diego vs. Seattle final.

It was a deadlocked pick in the studio so we asked ol' "Tommy No Pick" to settle our split decision.

Barry and FloridaMan Dev like San Diego Legion to finish their amazing season with a championship victory in front of their home crowd.

Bt, and Uncle Johnny are riding with last year's champion Seattle Seawolves to repeat with a massive road win in this final.

Tommy just knows there will be a game on Sunday and that both teams will be "competing". 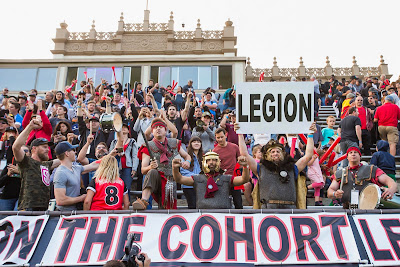 Above: San Diego's infamous fan base ... "The Lesions of Doom"

We do a little Table Talk in regards to Super Rugby (and remind Barry who won the South African conference with year ... ), and touch on the U20s world cup and the high light reel runs coming from the talented rugby youth.