It was June in 1983, and the soon to be burgeoning game of rugby 7's was waiting for it's inevitable explosion. Luckily for the soon to be 7's sensations, he arrived in the form of Dr. Don HARPO and the Attitude Adjusters Association. Back when Life U was just a small chiropractic college (and not the deeply talented rugby program they are in 2023) HARPO recruited a team to compete in local 7's tournaments.

"We played for the love of the game" ... was a line he continued to repeat as we talked about everything that goes into 7's organizing. The w-w-w-work, is omnipresent, and rarely smooth and painless ... but when done right, it can produce memories that lasts beyond any mortal man.

Below, are pictures, memories and some score lines from the Attitude Adjusters Association's 18th tour to Fort Walton Beach Florida on June 6th 1987.

When the microphones turned off, HARPO was quick to deflect praise for his growth of the game. He continually shines praise on legends like Emil Signes and Alex Goff who have both been involved for decades and have contributed to the growth of 7's in different ways.

HARPO continually reminds us at Rugby PickEm that the role of the "Old Boys" (and you simply MUST "know your role" ...) is to support the future generations, and remind them of why we play the game. FOR THE FUN OF IT! He's also not shy about his feelings as rugby grows into different rugby codes. Below was the first experiment of "Sixty-Minute Sevens" 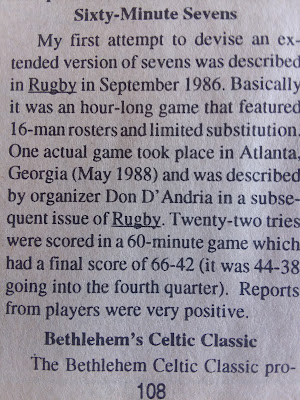 Gary Lamborn, Terrance Titus, and many more Eagles all played for the Attitude Adjusters at one point in time. What we know see professionally on the HSBC tour and in PR 7's was all built on the shoulders of legends of the past. But as the game continues to grow and morph, let's not forget where and how it all started ...