The Women's 2021 RWC (held in 2022) was an unforgettable kiwi experience. Not only is New Zealand a beautiful country (flora, fauna & great people), but rugby runs through their veins. The hosts were spectacular, and the Black Ferns put on a show throughout. They defeated a great French side in an exciting semi final, followed by a world class performance against England in the final.

The Women's Eagles left it all on the pitch, but it wasn't enough to beat a stout Canadian side. Led by Canadian rugby royalty Sophie de Goede, the team played big against the USA, defeating them twice in 8 days. Both of the de Goede parents were captains for their perspective Canadian sides and they're also great fans of the game travelling the North Island throughout the tournament and livin' the van life.

Update: On the eve of editing and releasing our prerecorded audio, there has been some bitter news out of the Allianz Premier 15s (full press release here). The league will shrink to the following 8 teams, leaving Sale Sharks and Wasps out of the picture for the following year.
British fans seem quite upset on twitter (who isn't mad on Twitter these days though?) at the fact that the northern part of the country doesn't have any representation (see the map below). I get that young professional sporting leagues want to grow at a "sustainable rate" ... but why shrink the league? Don't know all of the details, but seems like a step back for growth especially considering that England is hosting the next Women's RWC in 2025. 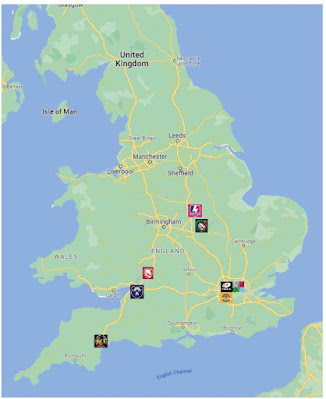 PICKEM!
Posted by Rugby_PickEm at 9:59 PM