We clipped some of the best Rugby PickEm moments from 2019 for you to enjoy over your holiday break. If you enjoy, pass it on to a rugby friend!

State of the Rugby Union

The 2020 MLR season has some SERIOUS juice. Massive signings all around the board. Adding Tendai Mtawarira, Ma’a Nonu, Digby Ioane, Renee Rangier, and Mathiew Bastareaud will only bring the level of the league up. American players will be pushed to perform at a level they have only seen in the brief moments in test matches against tier 1 nations.

More teams, more players, more games, …. But does that equate to more revenue $ ...? We’ll have to check back in on that question at years end. The ownership groups won’t see profits for years (similar to the slow growth of the MLS), but you can bet they’re constantly looking to maximize their revenue potential). The games will be played, whether the seats are full or empty. Will one of the new 3 teams from the east sell out all their games like the two-time MLR Champions Seattle Seawolves? Whose fan base will create a hostile environment to play against …. Not just one or two big games, but for all 8 home games? Seattle’s Starfire stadium has set the bar as a ruckus environment for the players and fans. Which east coast team will recreate a similar atmosphere in their new homes? 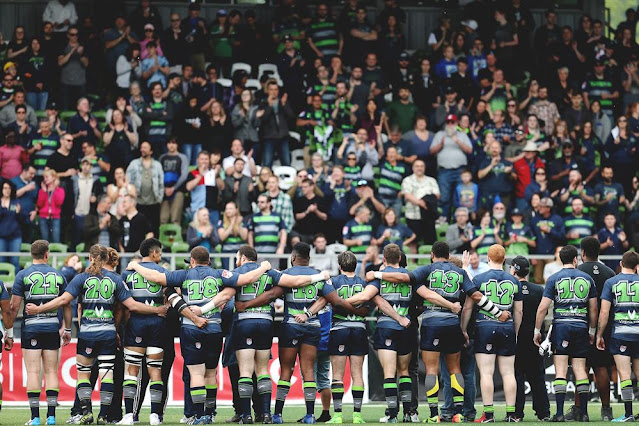 (Note: This involves many assumptions and hypotheticals)

The wildly popular college football programs went through a transitional phase back from 2010 - 2014 (details here). Looking to boost their income (via opening new television markets or a renegotiation of shared income with their conference), many teams left their traditional conferences for greener pastures. Some ended 50 year rivalries, others galvanized their fan base who demanded change in programs that saw their win column growth run stagnant. The end result was much of the same … plenty of college football being played every Saturday. The only difference is who you’re lining up against and again money (which as we know makes the world go round).

So who will end up moving (or be pushed out) out of their “traditional” leagues??? Super Rugby looks very vulnerable at the moment. It’s been rumored for years now that the South Africans sitting at the SANZAAR table are pondering a move out of Super Rugby, and instead bring television fanbase (many millions eyeballs more than Australia and New Zealand combined) to a European league.

And why not? More money, more coverage, and more importantly the same time zone (roughly, but massively closer that Australia/Japan/New Zealand/Argentina the current Super Rugby teams). Sure the flight from Johannesburg to London is no cakewalk, but trying crossing the Atlantic and Indian Ocean each week as you attempt to heal from the brutal rugby injuries and bumps these players get each week. The mitigated travel will increase player and coach stamina as well as their quality of life (ie time with family, etc.). Let’s say hypothetically, there are significant increases in shared television revenue in a “newly formed European / SA league”. South African gets to keep their players close (closer) to home than in the current Super Rugby set up, where they can’t offer contracts that are competitive with Europe.

It will follow the same pattern that college football teams saw during the conference realignment …. Teams will follow the money and join the leagues that gives them the best available competition at the best price. I still think Super Rugby is hands down the best professional rugby league (when it comes to form, production of international all stars, and just all-around beautiful running rugby), but it may sadly be coming to an end over television markets and the toll of trans-oceanic travel.

The USA will all be a part of this “league swapping” courtship (already has been in PRO 14 discussions for an east coast franchise). Will MLR teams in the future look for greener pastures? Could the US host a Super Rugby franchise in the next 3 years? I don’t see why not. There’s always an ownership group ambitious enough to take on a seemingly impossible business proposition. I’m not saying these are naive people … they’re all millionaires who already know they are going to lose money for the next 5 years (MLR Owners). In a way, they are making a short term financial sacrifice to grow the game professionally being the pioneers of this league…of course they want a long term successful franchise (with a potential pay day down the line), but I wouldn’t hold anything against an ownership group that wanted to shop their team in other leagues.

This is all hypothetical stuff, but the major athletic conferences did this dance just 5-10 years ago. Let’s hope that when it hits professional rugby, owners follow not just their wallet, but act on behalf of the fanbase and players too…

What kind of league swapping do you forsee in coming years in professional rugby? Comment below!