Three Screens Are Better Than One - MLR Update

Over the past 6 weeks, we've been watching the games and keeping a temperature on the early part of the 2021 MLR season. On Saturday night, Bt and Tommy NoPiks sat down to take in 3 games at once (4 games if you count the 2nd half of the Cali Cup). 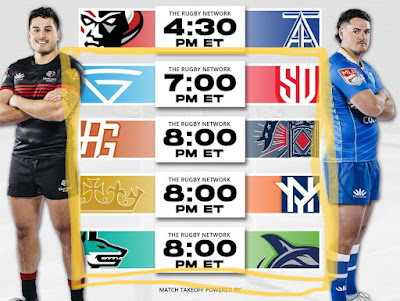 Much to the chagrin of our dear friend (the 2020 "Blogger of the Year" RPA winner) and seasoned rugby reporter Bryan Ray, the MLR decided to load up Saturday night's slate of games. While Bryan prefers the game schedule to be laid out over the course of an entire weekend, we strongly disagree... What could be better than 3 games on, all at once?!

We saw a great opportunity to binge some games and thanks to a generous TV donation by The Rugby Network, we built a triple screen masterpiece. 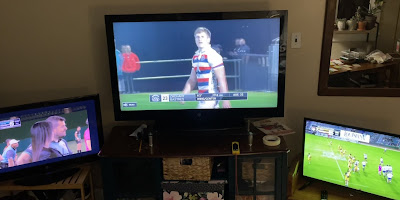 A poorly timed yellow card in the 60th minute killed San Diego's chances to level the score. They just couldn't seem to get the ball over the try line despite many appearances down in LA's 22. Luke White continues his rampage as one of the best scrummaging props in the MLR. Billy Meakes (better known as "Sir William Meakes" in Rugby PickEm circles) was MOTM.

Some people disagreed with the call that went against Mason Pederson and cancelled Austin's late try to bring the game close, but the bottom line is that New England scored and defended when they needed to. They walk away with a massive win on the road, and rested some starters too. Zach Bastres scored his first MLR try coming off the bench to help seal the game.

We we're pulling hard for NOLA to get their 3rd straight win and jump back into contention in the East ... but it wasn't meant to be. New York was in control throughout the majority of the game. Ed Fidow continues to be a master class for the New York backline, running through anything to get his team on the front foot. NOLA has some lengthy tries late in the match, but too little too late for NOLA. They are 0-4 at home to begin the year.

An early red card saw Dallas up against it at Choctaw Stadium. The team continues to have moments of play that are magnificent, but a lack of defensive cohesion lead to a litany of Seattle tries that put it out of reach. Dallas will get their first W before the season ends, it's just a matter of which team takes them too lightly. Seattle ends a three game slide and will have to front against the defending champs next weekend.

What a fantastic Saturday night of MLR action.