With summer 7's coming to a close, we thought we'd lay out some thoughts and observations of the 2022 spring and summer.

To be honest, I lose focus on the MLR when the local grassroots rugby starts up in late March / early April. I find myself locked in for weeks 1-6, then fizzling out when the rest of the rugby calendar heats up. Major League Rugby will always have to compete for eyeballs during their season, but the playoffs and final will always be a tough time for the average American sports fan. With Bbqs, boats and beaches on the horizon, it seems like we start to lose focus when summer comes knocking.

In the end, the drama off the pitch was more than contentious ... it was downright salacious! When the Gilly teams were suspended from the playoffs (on the eve of the playoffs), the shockwaves rippled throughout the r/MLRugby chat.

Can you imagine if something like this happened in the NFL ... on the eve of the playoffs?! There would be mayhem and physical revolt (sound familiar?) amongst the DQ'ed fan bases. But in the MLR, it seems like this will pave the way for future owners ... rock the boat, and get dumped without a life preserver.

The Gil based teams no doubt dominated on the pitch in their two seasons (see above). Was it because they 'stretched' the cap? Who knows ... We just enjoyed the spectacle of it all 🍸

A couple of F-45 stock crashes later (we rode it all the way to the bottom 💎👐), and it appears the two teams will be sold. After all the ash and rubble settles (can you imagine the intensity of the MLR board meetings where they voted to expel the teams? would have loved to be a fly on the wall),  ... we may look back at the Gilly era of the MLR and wipe a small tear from our eyes knowing we actually (kinda' sorta') miss the drama of the early days.

In the end, RUNY (that's right, they're still United in our eyes) hoisted the trophy in their home away from home, Red Bull Arena. On the day of the final, Seattle lacked that energy drink mentality and the kiwi-owned franchise become the first Eastern Conference team to win the MLR Shield ... (with plenty of kiwi imports). Cheers to a fun & dramatic 2022 season 🍻...

It's great that players (who aren't based in Chula Vista) are finally getting paid to play 7's. But is PR 7's best suited for the summer months? The club 7's circuit is packed into 3 months of the year. Why try and jam 3 tournaments in 5 weeks? Perhaps there's cost efficiencies for the start up rugby company to do this over a shorter time span ... maybe they wanted to scale and see if 3 events were even doable. The MLR season makes it hard to have any spring events ... but the fall season could be an alternative.
The reality of the situation is that there are no shortage of young rugby players with the hopes of becoming a 7's star. Most young players I know would line up for $1500 bucks over 3 weekends and fly from city to city to play in (kinda filled) stadiums ... all while growing their social media accounts via the highlights they make on that given weekend. PR 7's will never lack a player pool to choose from ... but can they grow a travelling fanbase?
The club 7's game has sharpened its sword. There are new clubs who are well backed, willing to search far and wide for recruitment, and the club 7's scene has begun to creep towards professionalism. That's not a bad thing either. I'm always for players getting compensated for their physical sacrifice. But similar to the inevitable split between college football and the NCAA ... club rugby was always headed this way.

The games run around the clock for 3 straight days, and there's no shortage of class players. Each year it's the who's who of elite 7's. Every 7's fan should try to one day make the pilgrimage to the mecca of tournaments. If you're worried about your kids being entertained ... well, they found the solution. An entire tent dedicated to video games.
10 years later, and it's safe to say it's a mainstay in the rugby calendar.
The Ramblin' Jesters won their 2nd title, placing them in a 3 way tie for past tournaments winners (USA Falcons, Denver 7's Selects & Ramblin' Jesters have all won twice).

Maybe 10 years later we could bump that winner's purse to $15k?!... any winning money at all is greatly appreciated in the rugby world 😁 so a big thx to Glendale's organizers who make this more than enjoyable each year.
I was lucky enough to find myself on the most exciting team of the weekend, the Tel Aviv Heat. The team finished 6th out of 20 total teams. The franchise is Israel's first professional rugby team and competes in the Rugby Europe Super Cup. Special thanks to one of the best young rugby coaches in North America Taylor Howden (who needed a bench boss in a pinch, ... sub cards can be challenging when your handwriting is almost illegible and you forget to bring a pen), TA Heat CEO Pete Sickle, and team investor / local rugby grassroots enthusiast Mike Holtzman for making the weekend so memorable with this great team. 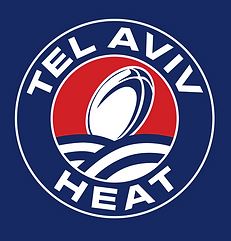 PICKEM!
Posted by Rugby_PickEm at 9:52 AM