You guessed it .... we made a 2020 Rugby PickEm mash up. Bt runs back the best moments in a year that was undoubtedly one of the more challenging, and gloomy years that we can remember. 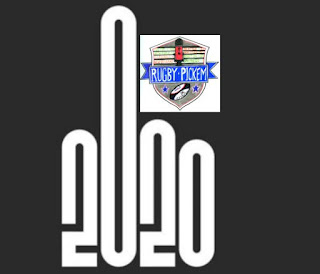 We started with a season preview where Kim Jordan graced the studio and the crew ran through each MLR teams' hashtags, mascots and other ridiculous pre-season banter items. Kim's presence that night was sublime, and the crew thoroughly enjoyed what would be one of the few recording sessions before the pandemic took hold here in the US and lockdowns began.

Next we included the last couple of live voicemail shows with Bt and Tommy NoPiks. Listening back to the final week 5 MLR PickEm almost drew some nostalgic tears, knowing the season would be called off later that week.

There are times when we record an interview and hang on to it for awhile. This was the case with Ben Pinkelman, Ke'Von Williams and Logan Collins debating "what are the best cross-over sports for rugby"? Ke'Von is never short on confidence, and he's convinced that Decathletes are the proper fit for rugby cross-overs.

As the games dried up across the globe, we got creative with our content as FloridaMan Dev and Tommy NoPiks led an intriguing discussion on the best rugby movies. 5/5 Rucks!

With the first annual Major League Rugby draft approaching, we decided to call our old friend Cole Zarcone who was coming off an amazing Senior season at Eastern Washington after spending the 2019 summer playing 7's with the Denver Barbarians. We knew he'd get drafted and sure enough, the San Diego Legion and Zack Test scooped him up with the final pick of the draft.

As New Zealand prepared to relaunch their 2020 Super Rugby Aotearoa season, Mickey Bateman dropped in the studio to spread his kiwi knowledge for the Rugby PickEm faithful.

Months down the line, the MLR released their 2021 schedule and Bt, Uncle Johnny & Tommy NoPiks did their "Way Too Early" 2021 playoff PickEm.

Harpo drops by in Denver on his way to Missoula, and Logan Collins wraps up the show with "The User's Guide to Helping Your Rugby Community".

What a strange year it was. PICKEM!